If anyone told you that you could lose weight, drastically improve your cholesterol levels, have the stamina and buff physique of a firefighter – all on a completely vegan diet – would you believe them? Rip Esselstyn, author of The Engine 2 Diet, thinks you can! We found a lot to love in this diet plan, but we also had a small bone to pick with it. 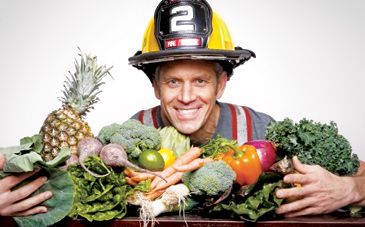 Do you love a good burger, dripping with mayo and cheese? Is your husband a real meat and potatoes man that resists anything remotely healthy? The Engine 2 Diet is a 28 day diet plan that is far from what you might expect a vegan diet to be. In case you are not familiar with vegan diets, this is a completely plant based diet. You not only give up meat, but you also give up dairy and eggs. On the E2 diet, you won’t be left with just carrot sticks and brown rice. You will eat tacos, fajitas, omelets, meat loaf, pizza, chocolate pudding and more! Don’t be thrown by the vegan label, and don’t think you’ll be malnourished on this diet. The plan is loaded with protein, calcium, and every nutrient you need.

Rip Esselstyn is a professional triathlete and firefighter that also lives a vegan lifestyle and has done so for more than 12 years He’s surrounded by steak-loving men in an Austin Texas fire house. How on earth could he convince his fellow firefighters to trade their steaks for tofu? It all started with a bet. While hanging around the firehouse, they all bet who would have the lowest cholesterol. After getting tested, they found many had very scary cholesterol levels. One member of the team, JR, had a cholesterol level of 344 and everyone realized this was a matter of life or death. The team rallied around JR, and Rip promised them all that they could lower their cholesterol if they would just change their diets. And so it began. Everyone switched to a plant based diet while on duty and their health improved. JR’s cholesterol dropped to 270. Then Rip bet him that he could make a dramatic change if he switched to a completely plant based diet both at work and at home. Just 3 weeks later, his cholesterol had dropped to 196!

From there, Rip created a 28 day plant based diet and volunteers put it to the test. Pilot studies showed massive drops in cholesterol, and everyone also lost weight. They did it by creating delicious vegan versions of favorite foods such as tacos and pizza. They also included a simple exercise program for overall fitness. The results were consistently good! Now the plan is available to you in a book, and the basics are even online for free.

The Engine 2 Diet makes switching to a plant based diet easy by providing recipes that mimic your meaty favorites and are just as good or better. We made the chocolate pudding and fed it to a group of kids and they begged for more! The ingredients were just silken tofu, unsweetened cocoa powder, agave nectar, and a smidgen of vanilla. It took just seconds to make in the food processor. We also served the family tacos using corn tortillas, Morningstar Farms crumbles, fresh salsa, and we spread the tortillas with hummus before adding the other ingredients. The hummus made a surprising difference and the tacos were addictive!

We suspect that most dieters are going to ask what they are allowed to eat on the E2 diet. Even healthy diet plans like South Beach divide fruits and veggies into good and bad lists. With E2, the only taboo foods are animal based. If it’s a plant then it’s OK, just prepare it in a low fat way. Don’t go nuts with nuts, oils, or higher fat plant based foods foods. It’s really that easy.

Engine 2 makes going vegan simple. The book and website are filled with guides that even seasoned vegans will find useful. But we are also interested in weight loss, aren’t we? Their studies showed that everyone who followed the diet lost weight. I guess if you are used to eating drippy burgers and cheese laden pizza, switching to a diet like this will automatically cause weight loss. But what about the rest of us that have been counting calories and measuring portions for a while now? Engine 2 is going to reduce your cholesterol and make you feel better. But the recipes don’t include calorie counts, and not all include serving suggestions. Vegan doesn’t mean calorie free, and we can only imagine how many calories are in the recipe for Sweet Potato Lasagna. Can we eat it and still have dessert? This is really the only problem we had with the Engine 2 Diet. We don’t mind figuring out portion sizes and calories on our own, but many dieters prefer the details and find it makes a new diet easier to grasp.

If you are interested in learning more, you can buy the book from Amazon, watch the video on the official Engine 2 Diet website, or sign up for a free membership on the E2 Academy website and get free recipes, a free menu plan, and even a grocery list to get you started. We think it’s worth checking out!