You are at:Home»Lifestyle»Well-Being»How I Uncovered My Secret to Weightloss

The last time you heard from me, I told you a little bit about my background with obesity and the psychological, emotional and physical struggles that being overweight has brought into my life.

Today, I’m going to tell you how I’ve been fighting that fight, and how I’m winning it a little more every day. This is just what worked for me, and the small steps I took. What works for you may be different, but remember that every success story starts with a lot of failures. No one is immediately successful at anything. Even Michael Phelps had to take swimming lessons at one point.

I have been trying to figure out exactly what a “healthy lifestyle” means for me over the last five years. I have tried, and failed and tried again. Through this process of trial and error I have found a balance between clean eating and indulging in my favorite treats (moderation truly is the key to everything). I combine this with a newly developed passion for heavy weightlifting to achieve the goals I have set for myself. 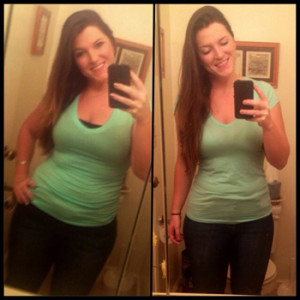 Dani before she began lifting weights, and Dani one year later.

Unfortunately, the lessons I learned and the goals I reached while I was first venturing into the world of proper nutrition and exercise were only temporary. I would give up after a few weeks, or months, and the weight slowly crept back up. But with every trial I achieved, I held on to something I could never lose…the knowledge that I was capable of change. If I did it once, there was no reason I couldn’t do it again. Every error, every failure, just taught me how to improve in the future.

I started joining online weight-loss communities and began a weight-loss blog. I poured over forums and read hundreds of accounts from people of all ages and backgrounds who had already conquered the challenges I now faced. I made my struggles “public” and reached out for support. The response I received from other men and women who shared my frustrations and struggles was overwhelming, and humbling. The accountability and support I found through these venues was truly irreplaceable.

That support gave me the courage to really pursue weightlifting. If my experience with multiple at-home workout DVDs had taught me anything it was that I loved resistance training and weights. I was dying to know what my body would be capable of if I really dedicated myself to it, but terrified of trying to weight lift in an actual, public gym. At first, it was intimidating. I walked into my gym, an out-of-shape woman in a sea of buff, sweaty, grunting men, and almost ran away. But I found a bench and diligently curled my five pound barbells in the middle of a crowd of men curling 50 pounds or more. The more frequently I showed up and fit myself right into the middle of the weight room, the less intimidating it became. I quickly realized that the only person looking at me and what I was doing, was me.

Weightlifting changed my life. It changed my body, it changed my mentality, and it gave me a confidence and an energy that nothing else did. I became smaller, more muscular, and even though the scale wasn’t reflecting any or much progress, my body certainly did. I learned to rely on other methods of tracking my progress – like pictures, measurements, how my clothes fit, and how I felt – instead of being ruled by the number on the scale, and that was the single most liberating lesson I have ever learned.

In the course of one year, I lost 35 pounds, three pants sizes, and can proudly squat and dead lift more than my body weight. I try to eat clean and stay within a healthy calorie range of 1,700 to 1,900 calories a day (I know that sounds like a lot, and it’s counter intuitive, but adding the extra 500-700 calories of healthy food per day to my diet jumpstarted my weight loss more than any 1,200 calorie “diet” ever did). But I’m not perfect. I love pizza and chocolate as much as the next person, and I’ve learned to not shame myself for enjoying food. One bad meal won’t undo your progress, just like one good meal won’t fix years of bad nutrition.

While heavy lifting may not be what works for or interests you, the universal lesson that I try to convey to anyone who asks me my “secret” is this: Over the years, I have learned that every tool I need to be successful, happy, and healthy I have always possessed. I just didn’t know how to uncover them. You are the only secret you need.

Dani Russell is a freelance health and fitness lifestyle writer living in Honolulu, Hawaii. She is currently working to complete a Master's Degree in Counseling Psychology and is a practicing student therapist. In her free time she can be found playing in the ocean, hiking and weightlifting. You can keep up with her daily quest to balance multiple jobs, fitness and graduate school via her tumblr.